Changes to the Power of Attorney in New York State

One of the changes to the Power of Attorney is the elimination of the separate Statutory Gifts Rider. Now all of the powers, including duties, financial management, and forms, will be under one form.

Changes to Power of Attorney Include Important Technical Amendments 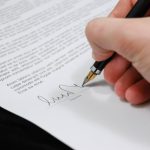 Allows a Person to Sign at the Direction of a Principal

Previously, if you were physically disabled and could not pick up or hold a pen to sign the document, you were not able to have a Power of Attorney executed on your behalf. Instead, you likely had to go through Article 81 Guardianship. This is not an ideal result as Guardianship tends to be more expensive and sometimes overly burdensome, especially for individuals who were cognitively intact, but physically infirm. (This was also a strange result because an individual could have a Last Will and Testament, which disposes of all of their assets, signed at their direction, but not the Power of Attorney).

One of the important changes to the Power of Attorney statute is that the principal is now able to direct a third party, other than the agent or successor agent, to sign on his or her behalf and in the principal’s presence. If you are recovering from a medical event, such as a stroke, where you have cognitively made the recovery but have been paralyzed as a result, you can direct somebody to sign the form on your behalf.

Expands an Agent’s Power to Gift up to $5,000 without any Modification

Under the old regime, the agent could only gift $500 per year without an accompanying gift rider. This cap severely limited the agent’s ability to make transfers of assets when necessary, for example, to engage in Medicaid Planning, or Estate and Tax Planning.

Under the new rules, the cap is now $5,000 per calendar year, and permits the removal of the cap by adding an optional gift clause and eliminates the need to sign and notarize an additional document.

Authorizes Delegation of Duties to One Agent

Once you accept the position of agent, you now have a legal relationship with the principal to act on his behalf. Until the principal dies or either the principal or agent terminates the relationship, the agent is expected to keep a record or receipts of all transactions made on behalf of the principal, such as payments, purchases, deposits and transfers.

The old regime required that the power of attorney be executed in the same way that one signs a deed or conveyance of real property. This meant that a power of attorney could be signed simply in the presence of a notary.

Allowance for Substantial Compliance instead of Exact Wording

Under the old regime, in order to be effective, one had to use the “exact wording” of the Statute and could not remove irrelevant clauses. For example, the older Power of Attorney statute included an optional provision for the designation of a monitor to  ensure that the agent was following the rules and directions laid out by the principal. Under the old regime, if you crossed out the monitor section, or removed the monitor section, then the Power of Attorney could be deemed irrelevant.

Another one of the changes to the Power of Attorney now allows for “substantial compliance” rather than “exact wording.” This means that you can remove clauses that do not apply to your specific situation and still have the Power of Attorney be valid.  This also means that you can add a date or a period. Simply put, minor spelling and punctuation errors, and omissions of irrelevant clauses are permissible, as long as the language is “essentially the same” as the statutory form.

Under the old regime, when a third party unreasonably rejects a properly executed statutory short form Power of Attorney, the principal bears the cost of suring the third party and compelling acceptance.

There are some nuances to the new statute. We are happy to discuss these nuances with you.

Or visit her at her office:

This post is made available by the lawyer for educational purposes only as well as to give you general information and a general understanding of the law, not to provide specific legal advice. By using this site you understand that there is no attorney client relationship between you and the lawyer. The post should not be used as a substitute for competent legal advice from a licensed professional attorney in your state.